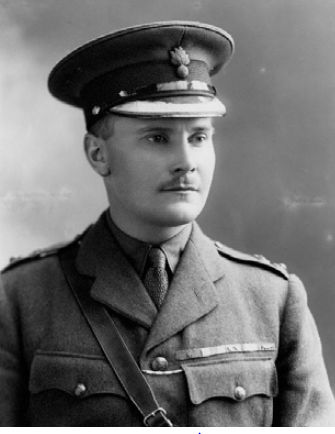 Lieutenant General Bernard Cyril Freyberg, 1st Baron Freyburg of Wellington, New Zealand and of Munstead, Surrey VC GCMG KCB KBE DSO was proposed into Household Brigade Lodge by Viscount Gort on 29th November 1919.  However, as a recent transferee from the Queen’s Royal West Surrey Regiment and, in keeping with the Lodge Bye-Laws, he was not initiated until 29th February 1922, after he had served three years in the Household Brigade.  Coincidentally, Freyberg’s transfer to the Grenadier Guards was sponsored by General Sir Andrew “Bulgy” Thorne, whose grandson, Major Lord Wigram MVO, is a long-standing member of the Lodge.

Freyberg’s actions on 13-14th November 1916 led to him being awarded the Victoria Cross “for most conspicuous bravery and brilliant leading as a Battalion Commander (The Hood Battalion, Royal Naval Division). By his splendid personal gallantry he carried the initial attack straight through the enemy’s front system of trenches. Owing to mist and heavy fire of all descriptions, Lieutenant-Colonel Freyberg’s command was much discouraged after the capture of the first objective. He personally rallied and re-formed his men, including men from other units who had become intermixed.

He inspired all with his own contempt of danger. At the appointed time he led his men to the successful assault of the second objective – many prisoners being captured. During this advance he was twice wounded. He again rallied and re-formed all who were with him, and although unsupported in a very advanced position, he held his ground for the remainder of the day, and throughout the night, under heavy artillery and machine gun fire. When reinforced on the following morning, he organised the attack on a strongly fortified village and showed a fine example of dash in personally leading the assault, capturing the village and five hundred prisoners. In this operation he was again wounded. Later in the afternoon, he was again wounded severely, but refused to leave the line till he had issued final instructions.”

He also served in the Second World War, throughout most of which he commanded the 2nd New Zealand Division, when fellow Freemason Winston Churchill called him ‘The Salamander of the British Empire’, due to his ability to pass through enemy fire unharmed. He ended the war as one of the most decorated British Empire soldiers and became Governor General of New Zealand from 1946 to 1952. On returning to England, he became Deputy Constable and Lieutenant Governor of Windsor Castle.