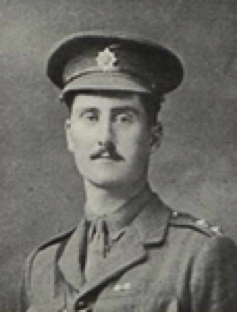 Legge-Bourke was killed in action on 30 October 1914 and is remembered on the Menin Gate, Ypres, and at St James Church, Fulmer, Buckinghamshire.

The only son of Colonel the Hon Sir Harry Legge KCVO Coldstream Guards and Lady Legge, Legge-Bourke was Page-of-Honour to HM King Edward VII and educated at Eton before being commissioned into the Coldstream Guards in 1909.

In France from August 1914 his name was sent in for mention for “his very excellent work and exceptionally good leading of his platoon on all occasions up to the battle of the Aisne.”

He was killed in action by a sniper on 30 October 1914 while in command of a platoon of No 1 Company, holding advanced trenches in Reutal Wood near Ypres.

Lieutenant Legge-Bourke married Lady Victoria Carrington daughter of the Marquis of Lincolnshire on 3 June 1913 at the Guards’ Chapel, leaving a son that he never saw, Edward Alexander Henry, born 16 May 1915.

He was initiated into Athlumney Lodge No 3245 in 1912, before joining Household Brigade Lodge in 1913.