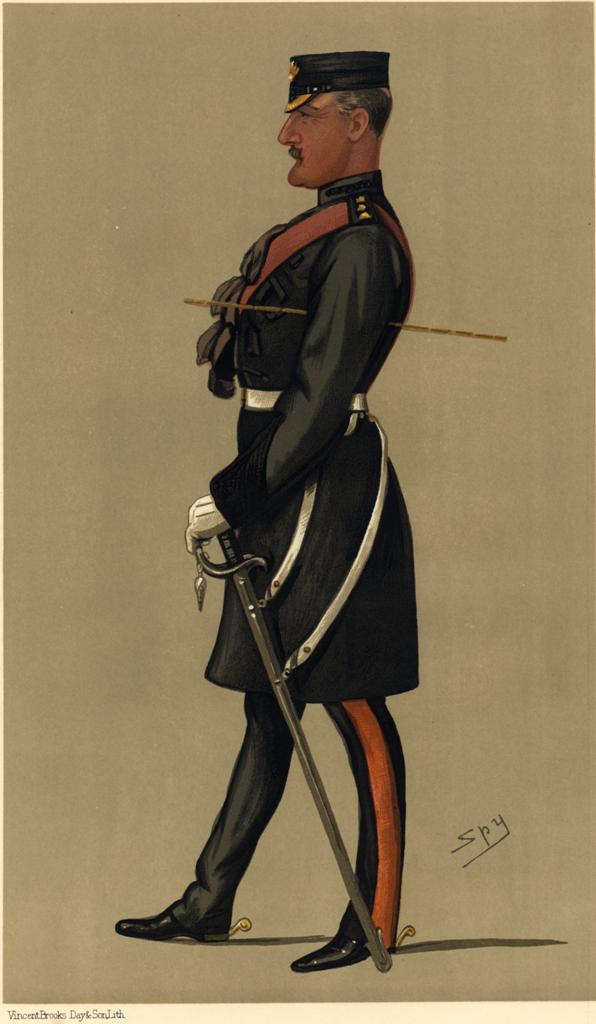 Major-General Herbert Francis Eaton, 3rd Baron Cheylesmore GBE KCMG KCVO Grenadier Guards was Chairman of London County Council, of the National Rifle Association and a sportsman. He was known to his friends as Brown.

Initiated into the Lodge of Friendship No 6, his father’s lodge, in 1869, he was also a member of United Lodge No 1629, and St Michael’s Lodge No 1630 in Coventry, and exalted in St Michael’s Chapter. Grand Lodge made him Junior Grand Warden in 1902.

He went to Eton where he rowed bow in the winning Eton House crew and shot for Eton in the Ashburton Shield both in 1866 before being commissioned into the Grenadiers at the age of twenty.

He commanded the 2nd Battalion, Grenadier Guards, as Vanity Fair put it bringing them “back from a well-deserved, if enforced, holiday in Bermuda. As some curious punishment, the entire battalion had been sent there for a year following ‘an act of insubordination.” this was not the last that Vanity Fair would have to say about him:

“He is a good all-round sportsman who drives his father’s team well; but though a fair shot, he is sometimes a little too eager to get birds. He has thrown himself heart and soul into most things connected with the Brigade; and the Boat Club and Racing Club would miss him as much as he would be missed from an Ascot luncheon. He has commanded the N.R.A. camp at Wimbledon and Bisley for seven years; yet withal he has found time to start and successfully edit The Brigade of Guards Magazine. He is a very good and very popular Colonel.”

He was made Major General in 1899, and was appointed a Knight of Grace of the Order of St. John in July 1901. Eaton succeeded to the title of 3rd Baron Cheylesmore in 1902.

At the outbreak of the First World War, Cheylesmore became commandant of a School of Musketry at Bisley Camp, where the ranges were put at the disposal of the Army Council. The school was to train and provide instructors in musketry from those who had passed the age of military service. The School trained some 14,500 officers, NCOs and civilians for service in the Army and Territorial Force.

During World War I he presided over several courts-martial. Cheylesmore was honoured Knight Grand Cross of the Order of the British Empire in June 1925. He died a month later aged 77, in a motor accident,the first peer to suffer such a fate in Britain.

He is commemorated a Lutyens memorial in Victoria Embankment Gardens and the Cheylesmore Range at Bisley named after him was opened for the 1948 Summer Olympics.