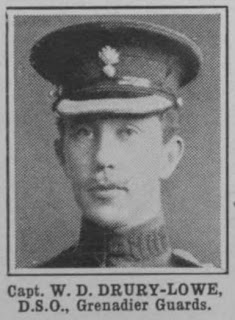 Drury-Lowe was killed in action commanding the Grenadiers’ King’s Company at the Somme on 25 September 1916.

Drury-Lowe went to Eton before being commissioned into the Grenadiers.

He served with the 3rd Battalion in South Africa before resigning his commission on succeeding his father and taking on Locko Park, the family seat. He became a territorial with the RFA, commanding the 2nd Derbyshire Battery, 4th North Midland (Howitzer) Brigade of the Royal Field Artillery for 7 years, leading it to France with the BEF.

He opted to take a demotion to Captain and rejoin the Grenadiers even when offered command of the 4th North Midland (Howitzer) Brigade as a Brevet Lt Colonel.

During fighting in the Quadrilateral at Guillemont he lead the King’s Company in independent operations when on 11 September they captured 50 prisoners while filling a gap in the line.

He was killed whilst in command of the King’s Company, 1st Battalion, Grenadier Guards on 25 September 1916 as the Battalion were pushed forward past Morval. By 15.30hrs they had achieved their objective and threw out a protective flank along the sunken road leading towards Guedecourt.

“As the King’s Company advanced and took the third objective, its commander, Captain Drury-Lowe, was killed by a shell while he was consulting Captain Hargreaves of the Irish Guards… He was a man without fear and a worthy commander of the King’s Company.”