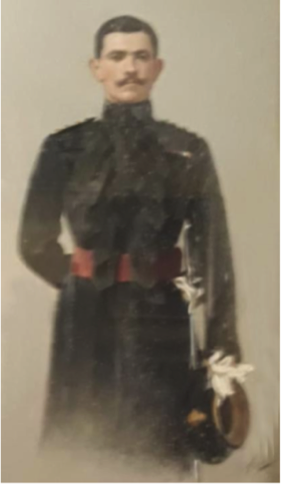 Stephen died of wounds received in action on the 10 September 1914 at the Battle of the Marne and is buried at Maintenon Communal Cemetery (south boundary) and remembered on the The Memorial Lych Gate at Bradenham Church, Buckinghamshire.

Born in 1877, he was commissioned from the 3rd Battalion the Prince of Wales’s Volunteers (South Lancashire Regiment) into the Grenadiers in May 1900, serving in South Africa on operations in the Orange River Colony. Cape Colony, and Transvaal, including the actions at Wittebergen.

From April 1908 to March 1909 he was employed with the Macedonian Gendarmerie, before returning to London as ADC to the General Officer Commanding London District. His time in Macedonia reflected the acceptance by the Great Powers of the importance of the small Balkan Kingdom in maintaining some balance to the ambitions of Serbia which were to be exhibited in the Balkan War of 1912-13 and the events surrounding the outbreak of the Great War in 1914.

After the early reverses of the Great War the 3rd Battalion Grenadiers was present at the defence of the Marne that turned the tide of the initial German advance. Ponsonby writes:

“No 3 Company Grenadiers under Captain  Stephen was sent on to support the Coldstream, followed later by No 4 under Captain Colston.  Both companies reached the edge of the wood,  but were there stopped by a hail of fire from the  machine-guns. Our field-guns could not reach  the houses where these had been placed, and  the howitzers were unaccountably slow in coming up. It was while he was endeavouring to find  some way of advance that Captain Stephen was shot through both Iegs; he was taken to hospital, and died of his wounds four days later.”

He was a keen huntsman, riding with the Fernie with his brother and fellow Guards Officer Captain Albert AL Stephen DSO Scots Guards, who was killed on 31 October 1914.

The Leicester Journal wrote “Captain Douglas Stephens, of the Grenadier Guards, who died from wounds and was buried in France, was a well known member of Mr. Fernie’s Hunt. He had a hunting-box at Great Bowden, from which he, with his brother, who is also an officer in the Guards, had hunted for several seasons. News has just come to hand of the death of another prominent follower of hounds in Mr. Fernie’s country, namely, Captain C. W. Banbury, of the Coldstream’s, who also died in France from wounds.”