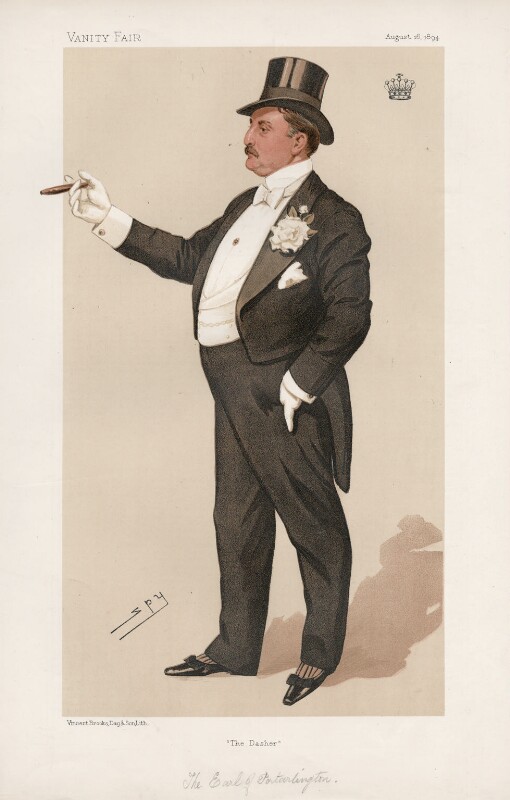 George Lionel Henry Seymour Dawson-Damer, the 5th Earl of Portarlington was a lieutenant in the Scots Guards and later honorary colonel of the 4th Battalion of the Leinster Regiment.

He was interested in race horses, cycling, photography, sailing and shooting. Vanity Fair in 1894 describes him as “not a very brilliant man, but people like him. He has a resonant voice.” The fifth Earl died at the early age of 42 in 1900, and the title passed to his son Lionel Arthur.

He was a keen Freemason. He was initiated into Faith & Unanimity Lodge No 417 in Dorchester, and joined and help found a number of other lodges including All Souls’ No 170, Pegasus No 2205 (the Lodge founded by members of Temple Yacht Club), Military No 2621 and of course Household Brigade. His primary craft lodge was Studholme Lodge No 1591.

He was in the Royal Arch, the Mark, Royal & Select Masters, Knights Templar and Rose Croix.

Grand Lodge appointed him Senior Grand Warden in 1897, and he was also a Grand Officer in both the Mark and Royal & Select Masters.

He was a clubable man being a member of Pratt’s, the Marlborough, the Guards, the Carlton, the Batchelors’, the Travellers’, and Kildare Street, Dublin. One for each day of the week. He was also a member of the Temple Yacht Club.