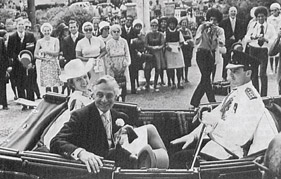 Lt Colonel Sir Richard Christopher Sharples KCMG OBE MC was  Governor of Bermuda shot dead by assassins linked to a small militant Bermudian Black Power group called the Black Beret Cadre. The former army officer, then a Cabinet Minister before resigning his seat to take up the position of Governor of Bermuda in late 1972.

Sir Richard was educated at Eton and Sandhurst before commissioning into the Welsh Guards in 1936. He went to France, winning the MC with his regiment at Boulogne in 1940. He became Brigade Major of the 17th Infantry Brigade in Italy in 1943 and was Mentioned. He was wounded in the following year and won the American Silver Star. He served on the staff of Lord Mountbatten.

His last military appointment as Military Assistant to Montgomery 1951-3, with the local rank of Lieutenant Colonel. He was awarded the OBE.

Sharples left the army in 1953 and after a year working in the Economic Section of the Conservative Research Department, he won Sutton and Cheam in the November 1954 by-election. He retained the seat at the 1955 election and held it until he stood down from the Commons on his appointment to Bermuda. He served as Anthony Nutting’s PPS at the Foreign Office 1955-56 and subsequently served as R.A. Butler’s PPS at the Home Office 1957-9. He was well-liked in the House and speedily built a reputation as an influential backbencher. After the 1959 General Election he was appointed an assistant Government Whip, but stood down in 1960. In February 1962 he was appointed Parliamentary Secretary to the Ministry of Pensions and after Macmillan’s ‘Night of the Long Knives’ was made Geoffrey Rippon’s junior at the Ministry of Public Works. In opposition after the Conservative defeat in October 1964, he became a spokesman on Home Office affairs and in 1966 was elected Vice Chairman of the Conservative backbench Home Affairs Committee.

In September 1970, following riots in Northern Ireland, he spent four days in the province and it was rumoured that he would be appointed Britain’s first Minister for Ulster. Certainly he appears to have taken a keen interest in the McCrory report on Ulster’s local government system. However, when the Heath Government was forced to take direct control of the province in March 1972, it was his fellow minister of state, Lord Windlesham who went to the new Northern Ireland Office to serve under Willie Whitelaw.

Instead of becoming Minister of State for Northern Ireland in the autumn of 1972 Sharples was offered and accepted the Governorship of Bermuda, standing down from Parliament to do so. Less than five months later he was dead.

Paul de Zulueta writing in the Guards’ Magazine offers the details of the tragic evening:

“Just before midnight on 10th March 1973, after a private dinner party, Sir Richard Sharples, Governor of Bermuda, accompanied by his ADC, Captain Hugh Sayers [Welsh Guards], took his usual walk in the gardens of Government House. Sir Richard’s dog, a Great Dane called Horsa, hurried about in front of them. There was a light north westerly breeze and the air was thick with scent from the garden’s cedar trees which had begun to flower. It was the night of the annual police ball and there was just one unarmed man on duty at the main entrance.

Given Government House’s sparse protection that evening, Captain Sayers took the precaution of carrying his 9mm Browning pistol. He was wearing a white dinner jacket which  had been made for him shortly before leaving for Bermuda. It had been tailored to look crisp and streamlined, and carrying a shoulder holster and 9mm pistol had never been part of Hugh’s brief to Airey & Wheeler, the tropical outfitters.

Horsa begun to growl at a cluster of hibiscus and oleander hedges which sheltered the tennis court. Captain Sayers immediately stepped forward in front of Sir Richard to see what the Great Dane was fussing about. The unarmed policeman at the main entrance later recalled that he had heard just four shots and, on arriving at the tennis court, found the lifeless bodies of Sir Richard, Captain Sayers and Horsa.”

Sharples was knighted in 1972.

In addition to his political activities he farmed and he was also an accomplished yachtsman. He was a liveryman of the Merchant Taylors’ Company and a freeman of the City of London. He was described as an “elegant, enlightened and efficient” officer.