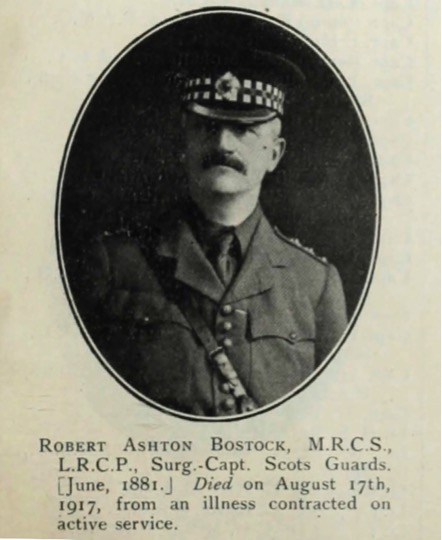 Surgeon-Captain Robert Ashton Bostock was the son of Surgeon-General John Ashton Bostock CB, and the grandson of Dr Bostock FRS who died on active service during the Great War.

He went to Wellington College in the Orange before following in his father’s and grandfather’s footsteps, training in medicine in Bart’s. He was made LSA of London in 1885, MRCS of England in 1885 and LRC of Physics in London in 1887.

He became Honorary Surgeon to the Queen and a Surgeon Captain to the Army staff in 1886 and Surgeon to the Scots Guards in 1887. He served as the 2nd Bttn’s MO for eleven years.

He retired from the army and moved to Glamorgan and went into general practise. He became a JP for Glamorgan in 1911. He assisted the War Office with the impact of the South African War and returned to the Colours on the outbreak of war, getting Mentioned for ‘valuable medical services‘ and later became President of the Shoreditch Medical Recruiting Board.

He died in 1917 from illness contracted on active service. He left a widow and two sons, one a subaltern in the Gunners and one a Senior Service Lieutenant.