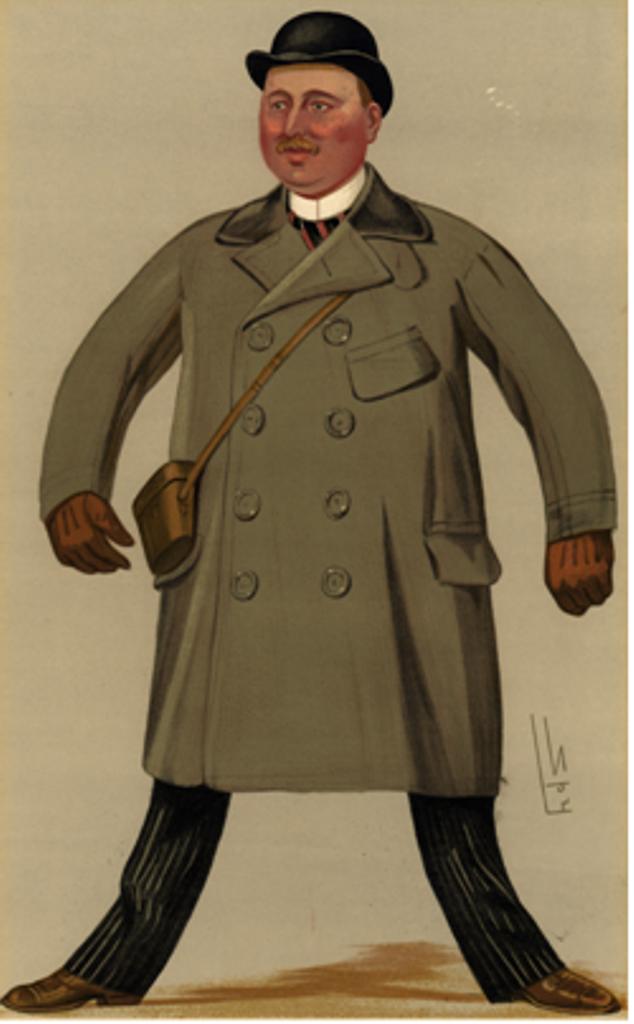 Colonel Harry Leslie Blundell McCalmont MP Scots Guards went to Eton, rowing stroke at Henley in the VIII and excelling at the Field Game. He was commissioned into the 6th Foot, transferring to the Scots Guards four years later. He retired from the Army in 1889, becoming Colonel of the 6th Militia Bttn of the Royal Warwickshires, his first regiment.

Whilst in the army he founded the Army Football Association with one Capt Lawrence of the London Rifle Brigade, and he briefly involved himself with coaching. Horses however won out. He bought the Cheveley Park estate and stud farm near Newmarket from the Duke of Rutland with the proceeds of an inheritance from his millionaire great uncle. He established a successful stable of racehorses winning the Gold Cup at Ascot, Alexandra Plate with Timothy, The Gold Cup, Derby & St Leggier with Isinglass.

He won the Newmarket constituency for the Conservatives in 1895, and increased his majority in 1900, despite being absent, albeit on active service leading his battalion in South Africa. He beat the Liberal candidate C D Rose, the owner of Ravensbury, the horse that was acknowledged as Isinglass’s main rival. His horse raced in colours derived from his beloved Field Game.

When asked however he placed boats above horses. He partnered with Lord Dunraven in Valkyrie III and owned the “fastest and finest steam yacht afloat in the Giralda, which can do two-and-twenty knots” and won International Cup for steam yachts.

He was initiated into Pentangle Lodge No 1174. He went on to join Shakespeare Lodge No 284 and Drury Lane Lodge No 2127.

1899 Vanity Fair, for who Spy or Leslie Ward penned the above caricature, described him in their accompanying profile to the image as:

“…he developed into a big and robust young fellow, who, at the age of nineteen, was chosen to stroke the Eton Eight at Henley. He also lent weight to his side in the Field Game… He is a big, cheerful, rosy-faced young man, very popular and quite unaffected. He is fond of horses… He is a thoroughly good fellow and a very eligible young man.”