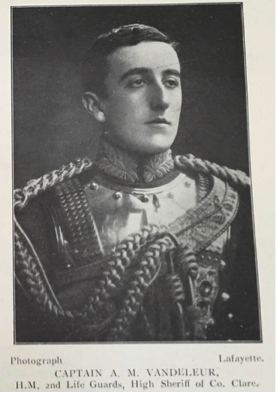 The son of Hector Stewart Vandeleur and Charlotte Vandeleur of Kilrush and Cahiracon, Co Clare, Vandeleur was killed in action on 30 October 1914 leading C Squadron 2nd Life Guards at the 1st Battle of Ypres, alongside fellow officer and brother the Lord Grosvenor.

Vandeleur was born in 1883 into a landowning military family and was commissioned into the 2nd Life Guards in 1903. He resigned his commission a Captain in 1913 before rejoining on 14 August 1914 and sailing for France.

Grosvenor and Vandeleur died together fighting against hopeless odds. The Indian Corps in France diary for 30 October 1914 states:

“…The 2nd Cavalry Division fought hard to hold its position. A squadron of the 1st Life Guards under Lord Hugh Grosvenor, and another of the 2nd Life Guards under Captain Vandeleur were surrounded in their trenches by the Germans. Scorning surrender, they fought to the last, and were absolutely wiped out in hand-to-hand fighting against hopeless odds.”

Worsley’s death offers a further insight to the deaths of all these brother officers: “Worsley was in command of the Machine Gun section of the Royal Horse Guards defending the area around Zandvoorde to the East of Ypres. They had come under overwhelming pressure and most of the unit had been withdrawn and replaced by 1st Life Guards in which Hugh Grosvenor served. However the MG section, being essential to the defence of the line was retained in the front line along with its crew, led by Lord Worsley.”

“Worsley… was covered in mud and had not shaved for a week having been subject to continual attacks by the German elite troops ranged against them. He wrote home that his last shave ‘was all the washing I’ve had time for in the last ten days’. The incoming Life Guards had one Machine Gun inoperative so Worsley’s gun was retained as it covered a vital section of the line. His team were tired and hungry having missed out on a meal during the relief by the 1st Life Guards, who had already consumed their own rations whilst moving up to the line and could not help their brothers in arms. However a timely parcel arrived from Worsley’s mother containing chocolate which was shared equally amongst the MG team.

They remained in position for six days and nights in appalling weather and under attack by overwhelming numbers. Their trench was shallow, and dug on the forward slope before Zandvoorde in full view of the Germans. It was clear to Hugh Grosvenor that the position was exposed and that the Germans were massing for another attack.

Grosvenor sent the following message to his HQ ‘There appears to be a considerable force of the enemy to my front and to my right front. They approach to within about seven hundred yards at night. Our shells have not been near them on this flank’. What remained unsaid was that the German artillery certainly had the range of the British trenches and had delivered significant quantities of shellfire, clearly with little reply. The morning of 30th November dawned as the eighth consecutive day that Worsley’s MG team had spent in the line. At 06.00hrs the German barrage started and it was intense. For 90 minutes there was little that the British could do but deal with their battered trenches and their wounded. Worsley’s team had to cover their vital Machine Gun with their bodies to protect it from mud and dirt – they well knew that when the shelling stopped they would need it in full working order. When the shelling stopped and the Germans advanced it was over in minutes.

An official report confirmed that ‘the (German) attack proved successful owing to greatly superior numbers’ and that the Regiment had ‘retired in good order’. Not all had retired in good order. Hugh Grosvenor and Charles Worsley were occupied in dealing with Germans swarming over their trenches and firing on them at close range and soon it came down to hand to hand fighting. The inevitable conclusion soon came. One man retiring looked back and saw Worsley still standing, firing at the enemy about to overwhelm the trench. There was nobody left alive to tell the tale of the final moments. There were no British wounded. There were no prisoners taken. A cavalry squadron, fighting as dismounted infantry, had simply ceased to exist. By 08.30 news that the 7th Cavalry Brigade had been pushed off the Zandvoorde ridge reached 1st Corps HQ. Perhaps the Commander, General Sir Douglas Haig, took a moment to spare a thought for Worsley who was married to Haig’s wife’s younger sister.”

The German unit that captured Worsley’s trench was the 1st Bavarian Jaeger Regiment and one of its officers found the bodies and on searching them for papers found that Worsley was a Lord. He ordered that any personal effects, including a gold ring should be taken from the body and returned to Worsley’s family. Unfortunately the German officer was himself killed a few days later and the effects never found their way back to England. All of the British bodies including that of Grosvenor, were buried in a mass grave which remains unfound to this day and all are commemorated on the Menin Gate Memorial.

All but one; Worsley’s body was given a separate burial and via neutral Holland the German authorities passed information of its location. After the war it was located and is now buried in Ypres Town Cemetery Extension, just yards from that of another Freemason and member of the Old Wellingtonian Lodge No 3404, the Household Brigade’s daughter lodge HRH Prince Maurice of Battenberg. The land where Worsley’s body was found was purchased by his wife and now is the site of the Household Division Memorial.

Vandeleur was initiated into Household Brigade Lodge in 1907.

The Vandeleurs were an Army family descended from General Sir John Ormsby Vandeleur: Vandeleur’s father Hector had served in the Rifle Brigade, his grandfather was Col Crofton Moore Vandeleur whilst his uncle Lieut-Colonel J O Vandeleur, served in the Gordon Highlanders. His older brother Lt Col C F Seymour Vandeleur DSO Irish Guards was first wounded and then killed in action in South Africa. His cousins Captain W M S Vandeleur 2nd Essex was killed in Action in September 1914 and Lt J B Vandeleur Leicester Regt was killed in November.

Vandeleur himself was the father of Giles Alexander Meysey Vandeleur and uncle of Lt Col John Ormsby Evelyn (‘Joe’) Vandeleur of the Irish Guards and the Guards Armoured who both fought at ﻿Arnhem.

* NB Lord Worsley and Close-Brooks were not freemasons. Their inclusion here is offered only for completeness of the description of the action.