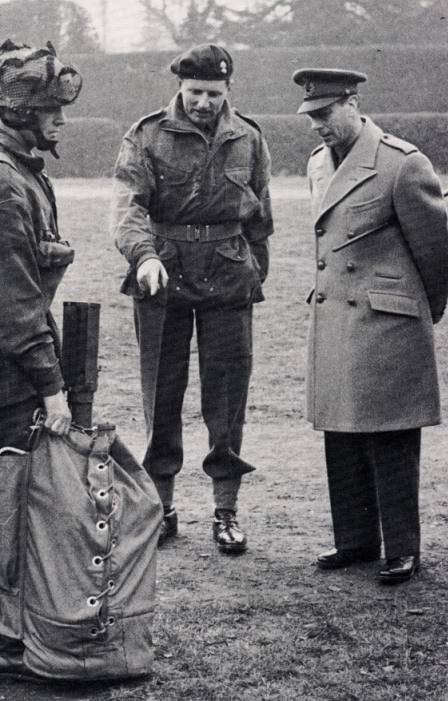 Lt Colonel De Voeux was killed leading 156 Battalion, the Parachute Regiment in the attack on Arnhem on 20 September 1944.

Des Voeux was educated at Ludgrove (then called Wixenford) and Eton. He proved an able scholar, attaining high marks in History, Latin, French, Elementary Mathematics, Physics and Chemistry. From Eton he went to Sandhurst, where he again excelled.

He was commissioned into the Grenadier Guards in 1931 and serving with the Regiment in Egypt. While serving with the Grenadiers 2nd Battalion Des Voeux qualified as a pilot. Before the war he had been Adjutant to Sir Frederick Arthur Montague Browning (called the ‘father of the British Airborne Forces’) and he was part of Browning’s initial HQ in London that was tasked with the formation of Britain’s Airborne Forces. In 1940 Des Voeux was sent as an instructor to an Infantry Company Commanders’ School near Chichester. Later in the year he volunteered for the Commandos and became a temporary Lieutenant Colonel in command of No. 10 Commando, which he until it was disbaned.

In january 1941 he went through the Staff College course at Camberley after which he became Brigade Major to the 20th Guards Brigade. He then returned to the Grenadier Guards for a short time as a Company Commander in the 6th Battalion. He joined the 1st Airborne Division when it started and in November 1942 Sir Des Voeux dropped with a battalion from the 1st Parachute Brigade in North-Africa.

He suffered a broken ankle which left him with a permanent limp. On 15 March 1943 Sir William Richard Des Voeux replaced Lieutenant Colonel Hose DSO as Commanding Officer of the 156th Battalion. The Battalion was training near Jenin, Palestine at that time. On 8 September 1943 the Battalion embarked onto two naval vessels lying off Bizerta harbour. They would land at Taranto, Italy and secure the port and then push on to secure the airfield at Gioja del Colle. On 9 September the Battalion landed at Taranto and a day later they advanced on Mottola. Mottola was captured and on 11 September the Battalion moved off towards the small village of San Basilio. Near San Basilio the Battalion attacked unit of the German 1st Parachute Division.

At Arnhem, after having dropped over Ginkel Heath at just after 15:09 on Monday 18th, the men of the 156th Battalion fought their way off the drop zone and assembled in the trees bordering DZ-Y. With the 11th Battalion being given fresh orders to move into Arnhem and support the 1st Parachute Brigade, and the 10th Battalion remaining on the drop zone to guard the wounded, only the 156th Battalion were free to commence the 4th Para Brigade’s attack, and they began to do so at about 17:00. Brigadier Hackett told Des Voeux to keep his men moving until dusk, and then halt them to take time to rest and reorganize before pushing on before first light. However, Sir Richard decided to keep his men moving long after dusk, as they had encountered comparatively little opposition on the way. Major Powell’s C Company were in the lead, and they had almost arrived reached LZ-L, approximately 4.5 miles from Arnhem Bridge, when they came under fire from a strong German defence. Des Voeux made his way forward to C Company and agreed with Powell that the position was too strong for a successful night attack, and so he withdrew the 156th Battalion into the woods where a firm perimeter was established for the night, before mounting a fresh attack in the early hours.

In the meantime, Brigadier Hackett had visited Divisional HQ to help arrange a clear plan of attack for the following morning. When he returned, he informed Des Voeux that he wished his battalion to advance over three areas of wood-shrouded high ground, the first of which was approximately 1 mile east of the 156th’s present position. With this high ground under control, the 4th Para Brigade would then be more able to mount an attack towards Arnhem. Sir Richard chose Major Pott’s A Company to lead the way, while John Waddy’s B Company supported their left flank. Des Voeux and Pott went forward to where C Company were positioned and they observed the ground that lay ahead of them, though the woodland was so dense that there was little they could see. As they were doing so, Brigadier Hackett arrived once more and informed the two officers of the urgent need to get moving. With that, Pott immediately left to quickly brief his platoon commanders.

A Company encountered a very strong German defensive line and were cut to pieces against it. However news of this had not filtered back to Battalion HQ, and so Des Voeux urged B Company on towards a similar fate, believing that Major Pott’s men were well on their way towards the second area of high ground, having only met the resistance of a few snipers.

With the 4th Para Brigade in retreat later that day, the 156th Battalion were amongst the first to be passed over the railway line and to the comparative safety of the southern side. However a mistake further down the battalion’s column led to most of Support Company, the remnants of B Company, and a platoon of C Company not crossing over the line, but instead carrying on along it in the direction of Wolfheze. These strayed men were utilized by Ken Smyth’s 10th Battalion in the defence of their area, but they would not be reunited with the rest of the 156th.

On Wednesday 20th, the 4th Para Brigade were retreating towards the Oosterbeek Perimeter and were viciously pursued by German infantry and tanks, while mortars rained down over the whole area. The 156th Battalion were the Brigade’s rearguard and they suffered the worst of it, however it is a great tribute to these men that the Germans never realized that they were fighting a foe in retreat – attacks were beaten off, and then the paratroopers mounted counter-attacks to push their enemy back. However a terrible toll was taken in terms of casualties and very few men made it into the Perimeter. Lt-Colonel Des Voeux was not amongst them. Sergeant Andy Thorburn discovered his fatally wounded commander, leaning against a tree. He asked if he could help him, but Des Voeux said “No. Move forward. The enemy is in front of you; they need you there”. It is believed that Sir Richard died shortly after.