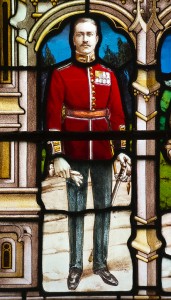 Filmer died of wounds on 27 January 1916. He was 37 and the 10th Baronet, son of Sir Edmund Filmer, 9th Bart., and the Hon. Lady Filmer, of East Sutton Park, Maidstone. He is buried at Merville Communal Cemetery (Plot VII. Row A. Grave 4), and remembered there, at the MCC and at St Peter’s and St Paul’s Church in East Sutton with the Window shown here.

Filmer went to Eton before being commissioned into the Grenadiers. He went to the Sudan in 1896, served on the Nile Expeditionary Force in 1898, was present at the Battle of Omdurman and served in South Africa during the Second Boer War.

He resigned commission in 1904 transferring to the Royal East Kent Yeomanry, The Duke of Connaught’s Own (Mounted Rifles) and returned to East Sutton Place, the family home. He became a justice of the peace, appointed by Kent County Council to serve as an Assistant Warden of the Rochester Bridge Trust and stood, unsuccessfully, as the Conservative candidate for Lincoln in the two general elections of 1910.

Following the outbreak of war, Filmer re-joined his old regiment on 1 February 1915. He was attached to the 4th Battalion in France from 26 July 1915. He was awarded the Military Cross for conspicuous gallantry and skill. The Regimental History records details of a daring reconnaissance mission, crawling across no-man’s-land to locate a gap in the barbed-wire defences of a German machine gun emplacement. He then led a raiding party which rushed the trench just a few yards from the enemy, where hand-to-hand combat and bayonetting began in earnest. The trench was completely cleared and the machine guns destroyed.

Just six weeks later Sir Robert died of wounds sustained when a shell exploded close to him. His body rests in the Merville Communal cemetery in northern France.

He was a Church Warden at St Peter’s and St Paul’s Church in East Sutton and a member of the MCC.