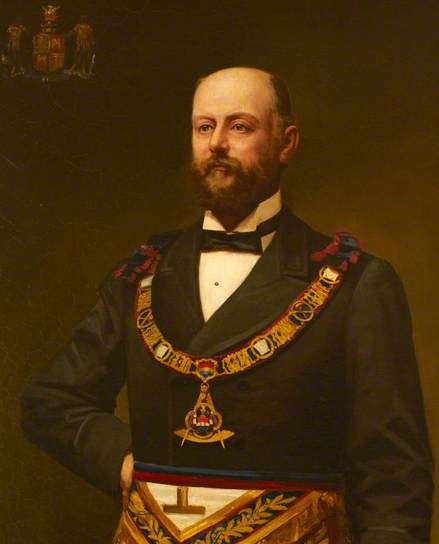 Captain Hugh de Grey Seymour, 6th Marquess of Hertford CB PC TD JP Grenadier Guards was a British soldier, courtier and politician. He was the Comptroller of the Household between 1879 and 1880.

Seymour was commissioned into the Grenadiers and became Honorary Colonel of the Warwickshire Yeomanry. He became an ADC to King Edward VII, and was re-appointed on the accession of King George V.

In 1905 he was appointed Lord-Lieutenant of Warwickshire and he was also a Justice of the Peace for County Antrim.

He was initiated in the United Lodge No 1629 and exalted in United Chapter, and would become the Provincial Grand Master of Warwickshire and Senior Grand Warden.

He joined Apollo Lodge No 301 in Alcester, George Beech Lodge No 2897 in Birmingham, and the Grand Master’s private lodge, Royal Alpha No 16.