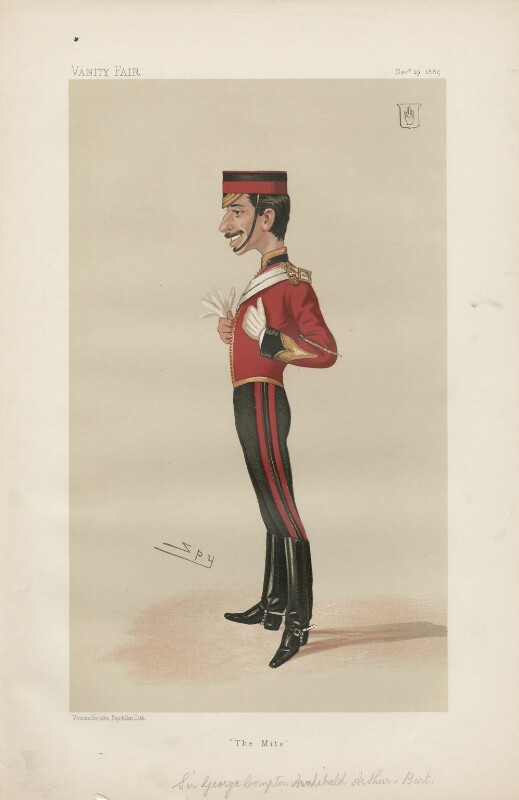 Captain Sir George Compton Archibald Arthur Bt MVO was the son of Colonel Sir Frederick Arthur and succeeded to the title of 3rd Baronet Arthur of Upper Canada on 1 June 1878.

He saw service in Egypt and on the Nile Expedition whilst attached to the Imperial Yeomanry and in the Boer War and the Great War with his regiment, the 2nd Life Guards. He was Personal Private Secretary to the Secretary of State for War, Lord Kitchener between 1914 and 1916.

He wrote biographies on Kitchener, Wolseley and Haig.

He was a keen and able amateur actor, fond of racing, a great friend of Prince Leopold, Duke of Albany and was more intimately associated with the Dowager Duchess of Montrose. He was a fellow of the Royal Society of Literature and a member of Brooks’s, the Carlton and the Marlborough.

At the time of the Whitechapel murders he was a 28 year old captain in the Royal Horse Guard and also an amateur actor, appearing as the corpse when Bancroft produced Theodora. He liked to engage in what was then a favourite and fashionable pastime of the wealthy Victorian, slumming it in the poor areas. Arthur unfortunately chose Whitechapel at the time of the Ripper murders as a good place to slum, and thus became a suspect. Dressed in an old shooting coat and slouch hat he was spotted by two alert Constables approaching a well known prostitute. Fitting the popular description of Jack the Ripper he was arrested, much to the amusement of the newspapers. He was soon able to prove his innocence.