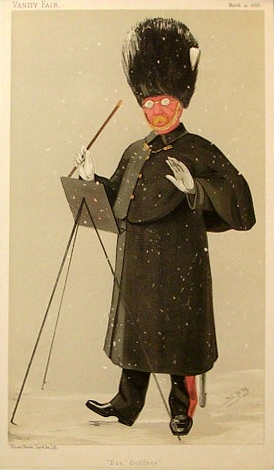 Suitably enough for the Founding Organist of the Household Brigade Lodge, Daniel Godfrey was Bandmaster of the Grenadier Guards.

He was the eldest son of Charles Godfrey, bandmaster of the Coldstream Guards for fifty years and his eldest brother was well known as a playwright.

Daniel Godfrey was educated at the Royal Academy of Music, where he would later return as professor of military music and become a fellow. In his early days he was a flute player in the orchestra of Louis-Antoine Jullien and at the Royal Italian Opera.

In 1856, on the recommendation of Sir Michael Costa and the influence of the Prince Consort Albert, Godfrey was appointed bandmaster of the Grenadiers. One of his first duties was to play the Brigade of Guards back into London after the Crimea. In 1863 he composed his “Guards” waltz for the ball given by the Officers of the Guards to the Prince and Princess of Wales, later King Edward VII and Queen Alexandra, on their marriage. This was a hit as were both his “Mabel” and “Hilda” waltzes.

At the Golden Jubilee of Queen Victoria in 1887, he was promoted second-lieutenant – the first bandmaster to receive a commission and he was decorated with the Jubilee Medal. In 1891 he reached the age limit of sixty, but his period of service was extended for five years. He retired from the army on 4 September 1896, with the reputation of England’s leading bandmaster.

Subsequently he formed a private military band which played at the chief exhibitions in England and with which he twice toured America and Canada.

Godfrey was initiated into Granite Lodge No 1328.